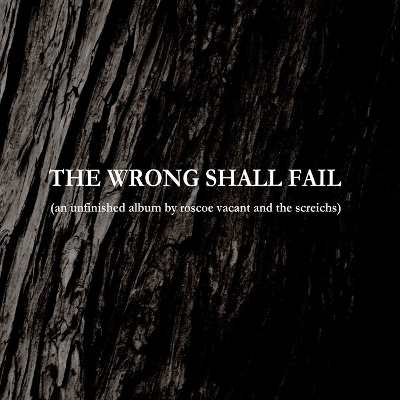 Different Circle Records (Glasgow, Scotland) are pleased to announce the release of “The Wrong Shall Fail”, the final album by disbanded Glaswegian cult-favourites Roscoe Vacant and the Screichs, a band once as being “like Fairport Convention on glue” (Intrepid Anarak punk zine). In their time, the band built a reputation for incendiary live performances that lovingly mashed together power-pop, grunge and good old fashioned punk rock influences.

Prophetically titled The Wrong Shall Fail, the album contains 12 tracks from the final, unfinished, recording and demo sessions before the seminal Glasgow alt-folk-punk band dissolved. It features fuzzy distorted guitars, riotous fiddles, thundering drums and chunky bass. This is a record for, but not limited to, fans of Camper Van Beethoven, Dead Milkmen, Alex Chilton, and Bob Dylan

Roscoe Vacant and the Screichs were formed in 2010 by acoustic punk performer Roscoe Vacant, bassist David Burns, guitarist Ross Gilchrist and drummer Norman Wilson. They released their first album “Reckurdt” – a swaggering alt.punk tubthumper that wore its heart on its sleeve – in 2011 to a wave of positive reviews both in print and online (“A strident effort of intent” – Daily Record, “a very well realised album that feels like a real work of art in its delivery” – Kilmarnock Standard, “a strong core of songs which have the authority, looseness and passion to set a stage on fire” – Is This Music?).

Roscoe Vacant will play a solo headline concert on Friday 11th of September in Glasgow at The Blue Chair (85 High St) to launch the album. Support will be from Jon Zip (from original Glasgow 70′s punks The Zips).

The EP will be released on 14th of September 2015 on CD and digital formats, available through the Different Circle Website and Bandcamp. The pre-order is open now.

All songs written by Roscoe Vacant and the Screichs.
Recorded and Mixed by Tommy Duffin, 16 Ohm Studios, Glasgow.
Additional overdub recording by RV, DB, and JG.
Demo tracks were recorded to cassette in Norry’s Loft between October 2012 and May 2013